Caregivers in Willingboro NJ: A Basic Overview of Dementia for Family Caregivers

Alzheimer’s disease is the 6th leading cause of death in the United States, more than breast cancer and prostate cancer combined.[1]

There are a wide range of symptoms and dementia types which come from a common cause of damaged brain cells. This interferes with the brain’s ability to function correctly. With this basic awareness of the cause behind dementia, caregivers and others around someone with dementia, may have a bit more compassion for those suffering from this disorder.

Symptoms, aside from memory loss, which stem from dementia include:

According to the Alzheimer’s Association, its important to keep in mind that memory issues are not exclusive to dementia. This means that short term memory issues doesn’t necessarily mean someone has dementia.

With age comes some memory loss. A basic difference is that someone with dementia tends to continue to deteriorate rather than have memory loss now and then or have any improvement to their memory. Thus, deterioration from dementia not only is permanent but also gets worse.

In addition, dementia symptoms are gradual. If caregivers are concerned that their loved one may have dementia, it is a good idea to contact a physician. [2]

The most common form of dementia is Alzheimer’s Disease, which accounts for as much as 80% of the dementia cases. Alzheimer’s is a cortical dementia. [3] Alzheimer’s is considered a slow and progressive disease where the malady can be present even before any of the symptoms show themselves.

Other types of diseases under dementia include Parkinson’s Disease (an example of subcortical dementia) and Huntington’s Disease. Also, Wernicke-Korsakoff Syndrome, though noted under dementia, is primarily noted to be due to B1 deficiency and is caused by excessive alcohol use.

For caregivers who see their loved ones suffer from this deterioration, it can be an emotional process. With new treatments being tested all the time, caregivers may want to keep in contact with their loved ones’ physicians about updates.

If you or an aging loved-one are considering caregivers in Willingboro, NJ, please contact the caring staff at TLC Home Care Services today. Call (856) 234-8700 for more information. 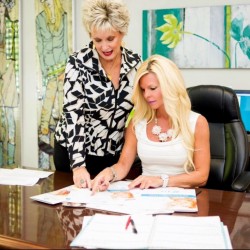 Patti Maltese and Kelly McCabe
Founders, and Co-Owners at TLC Home Care Services
Patti is a founding partner and co-owner of TLC and has been in the staffing industry for many years both as an Office manager, recruiter, client specialist, and sales rep. She has previously staffed nurses for the state of NJ in state facilities and currently maintains her CHHA license to date. She has a Bachelors Degree in Communications and oversees the daily operations of TLC. She recently graduated from the Goldman Sachs 10KSB program for business owners in Phila. and the relationships and knowledge from that program has helped her to take TLC to the next level in multiple ways. She is a mother to 2 daughters and a grandmother to 2 girls as well.She resides in Mt. Laurel and loves advocating for seniors and has performed in “Dancing with The Cherry Hill Stars” fundraiser for education.

Kelly C. McCabe is a founding partner and co-owner of TLC HomeCare Services.She and her business partner,Patti Maltese founded TLC HomeCare Services in March of 2009.In addition to management, marketing and sales, staffing and recruiting, Kelly holds her New Jersey producer’s license in Health and Life insurance and is also a New Jersey Certified Home Health Aide.Kelly is the proud mother of two daughters and is a resident of Moorestown, NJ.